In the Q&A session that followed last night’s performance of Melted Butter, author Sakis Serefas claimed he was heavily influenced by Alfred Hitchcock’s assertion that “The length of a film should be directly related to the endurance of the human bladder.”  His play and this production by Praxis – the Oxford University Greek Society’s theatre group – under the direction of Anastasia Revi, owes more than that to Hitchcock, though.

This is a film-like presentation of a story where scene follows scene in a way that exposes character, tells the story and engages the audience in equal measures. 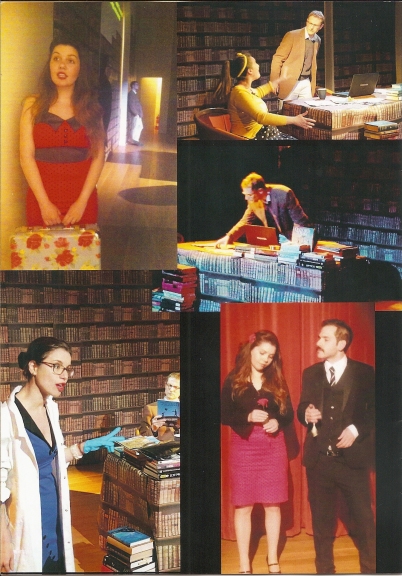 Clockwise from top left: Sevi Iosifidou as Loula, Katerina Kaselimi as Daisy, Alan Knapman as The Professor, Nikos Mitakidis as Tasos and Evangelia Kougioumoutzi as Dr Philippou in Praxis’s “Melted Butter” at the Simpkins Lee Theatre (Photo used with acknowledgement)

The story is a traditional one (spoiler alert): Girl meets boy – boy seduces and deceives girl – girl abandons boy – boy beats girl’s brains out and strangles her in a fit of passion. With the girl dead and the boy imprisoned for twenty years, convicted on the strength of his own confession, the play is not so much a detective story as an exploration of the impact on those around the crime, including the man who comes to tell the story (in this production, an Oxford professor writing a book) of the real event that took place in Thessaloniki in 1957).

We are asked to consider the ways in which we live our lives alongside the deaths and dramas of others, sometimes oblivious of the fact that this hotel room has been the scene of a death or that that fork or plate in a restaurant was used by a victim of some crime. Meanwhile at other times we are voyeuristically taking our route to buy our bread or our fish so that we “just happen” to pass the scene of an infamous crime. For me, the layers of voyeurism from the waitress, the night manager and the victim’s friends, from the pathologist that describes the crime scene as smelling of “melted butter” and the professor, all recall the ways in which Hitchcock’s movies suck his audiences in to their view of the world.

I feel that this production made a great evening. I’m pretty sure that opinion was shared by my fellow students and our tutor – and the rest of the audience was certainly appreciative. This production was in the Simpkins Lee Theatre, a larger venue than previous Praxis productions, and a full house vindicated that decision.

How was it as a learning experience for a student of modern Greek? For me the opportunity to hear Greek spoken in combination with a set of translated sur-titles (the company translated the play’s dialogue to create these) was really helpful. I couldn’t have managed without the sur-titles (or during the Q&A without Anastasia’s translations) but there was plenty I could understand. A hint for others attending: if you think you need to read the sur-titles, the front couple of rows aren’t the best; you’ll end up with the theatrical equivalent of tennis neck, trying to follow the sur-titles and watch the action.

I hope Anastasia Revi and Praxis continue in their mission to bring modern Greek drama to a mixed English and Greek audience. While Anastasia’s productions have used some of the conventions of Greek classical drama (the skene speaking in last year’s production of Το Κτίριο, and the chorus in Melted Butter), it’s clear that modern Greek drama still has plenty to say to a wider public. The professional performances of the entire Praxis company and the production by the off-stage team demonstrate just how good a production by amateurs can be.

Previous Praxis productions reviewed on I Speak A Little Greek…..